The FN 15 Military Collector Series M4 is a military-replica rifle made to FN’s exacting specifications. This semi-automatic rifle features an M4-profile, 16-inch, 1:7″ RH, button-broached, and chrome-lined barrel. The UID-labeled lower receiver is equipped with an ambidextrous selector switch.

Available for commercial and law enforcement.

The FN USA Military Collector M4 is a civilian market military replica rifle of the M4, which has been made to FN’s exacting specifications. FNH USA has created an excellent choice for duty, defense, competition, and hunting applications with the tradition and look of the M4.

The FN 15 Military Collector M4 semi-automatic rifle is a near-exact reproduction of the actual M4 rifle issued to the US Military. FN is a world leader in battle-proven firearms and a supplier for the US Military. This semi-automatic version of the military issue M4 rifle is chambered in 5.56x45mm NATO and features a 16-inch, 1:7 RH, button-broached, and chrome-lined barrel. The flat-top, optic ready receiver features a MIL-STD-1913 rail with amateur Mil-Spec adjustable rear flip-up sight.

Out front, the FN 15 comes with a military standard Knights Armament M4RAS Adapter rail with rail adapter covers, a vertical foregrip, and A2 front sight. The UID-labeled lower receiver is equipped with an ambidextrous safety selector switch with a non-functional full auto setting that looks just like its select-fire big brother, the M4A1. The FN 15 sports a left side, front-mounted sling mount and 6 positions adjustable stock with a rear sling mount. The FN 15 Military Collector M4 is a must-have addition for any serious military firearm collector. 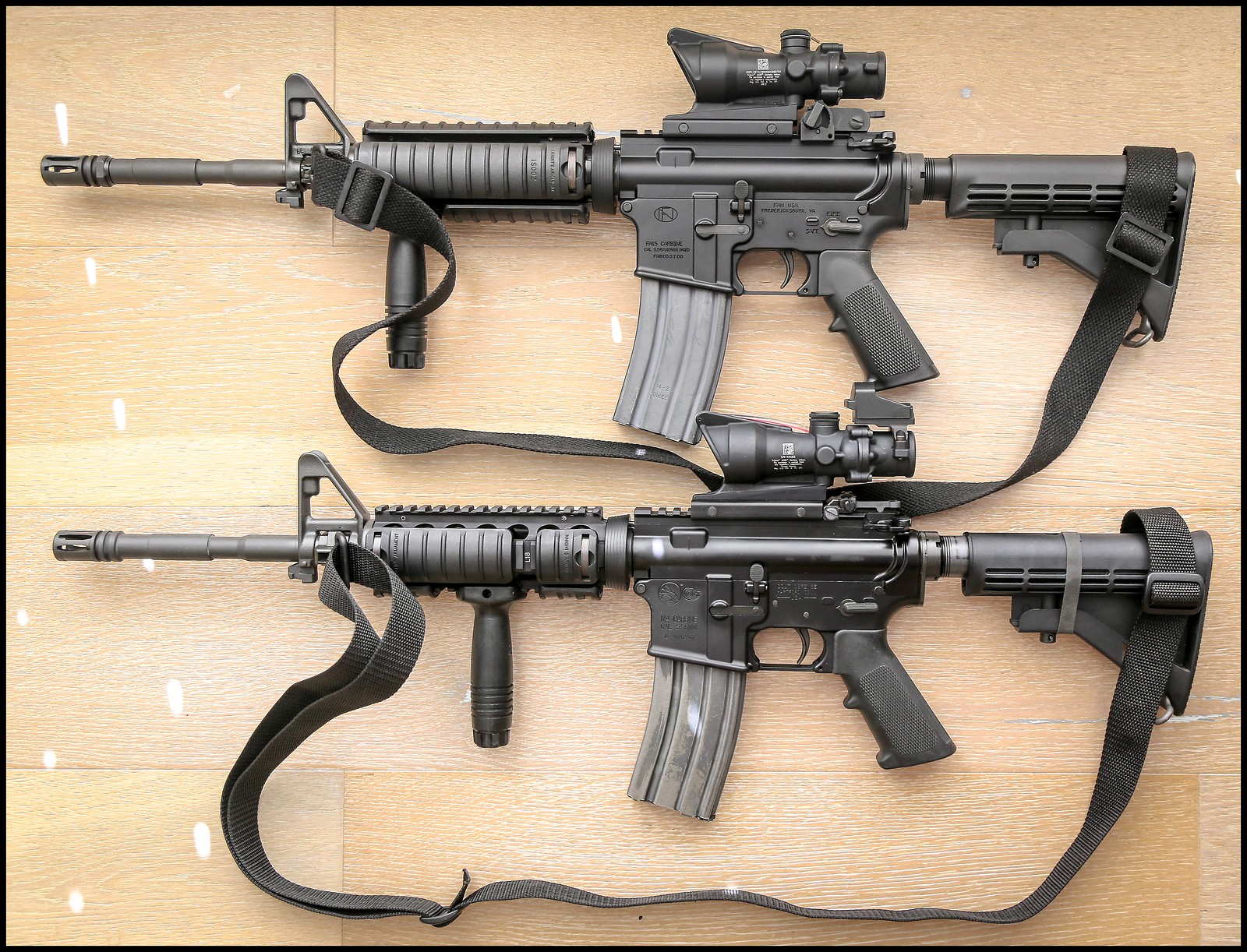 Own a piece of firearm history from the makers of the world’s most battle-proven firearms. The FN 15® Military Collector Series M4 brings to market a military replica rifle made to FN’s and the U.S. military’s exacting specifications. The semi-automatic rifle is chambered in 5.56x45mm NATO and features a 16-inch, 1:7 RH, button-broached, and chrome-lined barrel. The UID-labeled lower receiver is equipped with an ambidextrous selector switch, just like its select-fire big brother, the M4A1.

WHAT IS THE BOX

This rifle features a 14.7″, button-broached, chrome-lined barrel that is 16″ in overall length with a permanently affixed A2 style compensator. It’s built around a durable aluminum flat top receiver with the M-1913 MIL-STD Picatinny rail that sports an adjustable rear sight and A2-style front sight for easy target acquisition.

It features a Knights Armament M4 RAS Adapter Rail handguard with rail adaptor covers and a collapsible, 6 position stock with a sling mount. For those who want the newest version of this battle classic with the accuracy and reliability of FN, look no further than the FN 15 Rifle Military Collector M4.

The FN 15 Military Collector M4 shares all of the military M4’s characteristics, which are centered on compactness and ease of handling, in a semi-auto package. The rifle weighs 6.6 pounds unloaded. It measures 30.5 inches with the stock collapsed and 34.2 inches with the stock fully extended. Like the Military Collector M16, the M4 version has a modified trigger to pass muster by the BATFE for civilian possession.

Along these same lines of BATFE compliance, the FN 15 Military Collector M4’s barrel is 16 inches long versus the original’s 14.5 inches. However, this is not as onerous as it sounds. FN achieves the 16-inch legal length by permanently attaching the A2 flash suppressor to the 14.5-inch barrel.

A six-position-collapsible buttstock distinguishes the FN 15 Military Collector M4 from the full-sized M16, but they both come with the same sights and Knight’s Armament rail systems.

*Bullet weight measured in grains, velocity in fps by chronograph, and accuracy in inches for best five-shot groups at 100 yards.

Style and Authenticity * * * * *
This is the M4 minus the selector switch to full auto. When it comes to the rifle I used in combat and how I used it, it’s not “close to the real thing.” It is the real thing.

Customization * *
You can swap just about everything if you no longer want the “M4” furniture. But not the flash hider, that’s on for good.

Reliability * * * * *
It fired everything without issue. No problems loading, firing, or ejecting any round put through for over 500 rounds.

Accuracy * * * *
About 1.5” groups with common military ammunition. That’s more precision than any of my service rifles ever achieved.

Overall * * * *
This is the new military standard. It resets the bar on what “mil-spec” should mean for AR15s. Yes, the vast majority of the gun is the same as you’re used to, but the better trigger and better barrel make for an important improvement over previous service rifles.